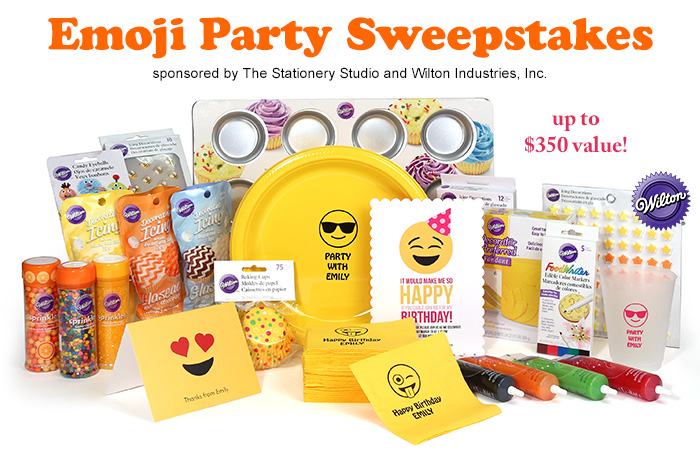 CONGRATULATIONS TO OUR SWEEPSTAKES WINNER!

Winner will be contacted by e-mail with
prize redemption information.

Thanks to everyone else who participated!

NO PURCHASE NECESSARY TO ENTER OR WIN. A Purchase Will Not Increase Your Chances of Winning.

2. Eligibility: Open to legal residents of the 48 Contiguous United States and the District of Columbia, 18 years of age and older as of June 16, 2016. Employees of The Stationery Studio (the "Sponsor"), their respective parents, subsidiaries, divisions, affiliates, suppliers, distributors and advertising, promotional and judging agencies (collectively "Sponsor and its Parties") and the immediate family members (spouses, parents, children, and siblings and their spouses) and household members of each, are not eligible to participate or win.

3. How to Participate in the Promotion and Claim a Prize:

One random winner will be chosen from qualifying submissions. Winner will be announced via our Facebook page and by direct email on July 1, 2016. Chances of winning are dependent solely upon the number of entries. Redepmtion instructions will be sent via the email address used to enter the sweepstakes.

Prizes unclaimed within 2 weeks of notification will be randomly awarded (in Sponsor representative’s sole discretion) to another eligible contestant.

By participating, you understand, and will agree in writing, that if you are awarded a prize, you hereby grant the Sponsor, its affiliates, subsidiaries, assigns, licensees, and legal representatives the irrevocable, perpetual, worldwide right to use, reproduce, edit, market, store, distribute, have distributed, reproduce, re-arrange, change (including blurring any trademarked items on clothing), add to or delete from, translate, adapt, or otherwise revise and/or alter the video footage, photographs, or material developed ("Footage"), publicly and privately display, communicate, publicly and privately perform, transmit, have transmitted, create derivative works based upon, and promote the Footage, for editorial, commercial or promotional purposes, in their sole discretion.

Sponsor and its Parties reserve the right at their sole discretion to disqualify any individual that acts in an unsportsmanlike or disruptive manner, or with intent to annoy, abuse, threaten or harass any other person. Any attempt by any person to deliberately undermine the legitimate operation of the Promotion may be a violation of criminal and civil law, and, should such an attempt be made, Sponsor reserves the right to seek damages from any such person to the fullest extent permitted by law.

Sponsor and its Parties and their respective officers, directors, shareholders, employees and agents, and any and all Internet servers and access provider(s) (collectively, the "Releasees") are not responsible for: any incorrect or inaccurate information; human error; technical malfunctions; failures, omission, interruption, deletion, or defect of any telephone network, computer online or e-mail systems, computer equipment, servers, providers, or software, including any injury or damage to participant's or any other person's computer relating to or resulting from participation or inability to participate in this Promotion; theft, tampering, destruction, or unauthorized access to, or alteration of clues; data processing that is processed late or incorrectly or is incomplete or lost due to telephone, computer or electronic malfunction or traffic congestion on telephone lines or the Internet or any website; or for any other errors or problems of any kind relating to or in connection with the Promotion, whether computer, network, technical, printing, typographical, human or otherwise or any combination thereof, including, without limitation, any errors or problems which may occur in connection with the administration of the Promotion or in any Promotion-related materials. By entering the Promotion, entrants affirm that they have read and accepted these Official Rules.

4. Prizes and Approximate Retail Value ("ARV"): Prize includes an assortment of Wilton decorating products (ARV $100) and a $250 voucher to The Stationery Studio applicable to products in our Emoji Products category (http://www.thestationerystudio.com/emoji-products-c4585.html). No substitutions. Prize may not be redeemed for cash value. Total prize approximate retail value is $350.

5. General Rules: No substitution or transfer of prize permitted except at the sole discretion of the Sponsor who reserves the right to substitute a prize of equal or greater value in the event the prize is unavailable. All applicable federal, state and local taxes are the sole responsibility of winner. Prize is awarded "as is" with no warranty or guarantee, either express or implied by Sponsor. By participating in the Promotion, participants agree to be bound by these Official Rules and the decisions of the Sponsor. The Sponsor reserves the right, in its sole discretion, to cancel, modify or suspend the Promotion if it is not capable of running as planned, including, but not limited to, infection by computer virus, tampering, unauthorized intervention, fraud, technical failures or any other problems beyond the control of the Sponsor (including cancellation of the Promotion) and award the applicable prizes that were claimed/awarded prior to cancellation and the remainder of prizes will go un-awarded. Prize winners and all entrants, as a condition of participation in the Promotion, agree to release and hold harmless Sponsor and its Parties and each of their respective affiliates, officers, directors, agents, and employees will have no liability or responsibility for any claim arising in connection with participation in the Promotion or any prize awarded. Prize winners assume all liability for any injury or damage caused, or claimed to be caused, by participation in the Promotion, the receipt, ownership or use of prize awarded or any typographical or other error in these Official Rules or the announcement of offering of the prizes. Void where prohibited and subject to all federal, state and local laws. Acceptance of prize constitutes permission to use the winner’s name and likeness for promotional purposes without further compensation except where prohibited by law. Sponsor is not responsible for any typographical or other error in the tweeting of the Promotion materials or the offering or announcement of the prizes. A winner may only be awarded one Grand Prize within a one year period. As a condition of participating in the Promotion, participant agrees that:

1) under no circumstance will participant be permitted to obtain awards for, and hereby waives all rights to, punitive, incidental, consequential or any other damages, other than for out-of-pocket expenses; 2) all causes of action arising out of or connected with the Promotion or the prize awarded, shall be resolved individually, without resort to any form of class action; and 3) any and all claims, judgments, and award shall be limited to actual out-of-pocket costs incurred, but in no event attorneys’ fees. You hereby represent and warrant that you have read these Official Rules and are fully familiar with its contents.

6. Winners List: Winner will be notified via the email address used to enter the sweeptstakes on Friday, July 1, 2016. Winners names will also be posted on our Facebook wall (www.facebook.com/theStationeryStudio).

7. By entering this Promotion you will be automatically added to our email list. You may opt out of our promotional emails at any time.

You'll be the first to know all the important updates.
No, thanks Subscribe